“MARCO POLO”: Assignment of a Vietnamese trademark that is similar to the trade name of the assignor

Recently, D&N International successfully assisted a client to overcome the Vietnam IPO’s refusal of a 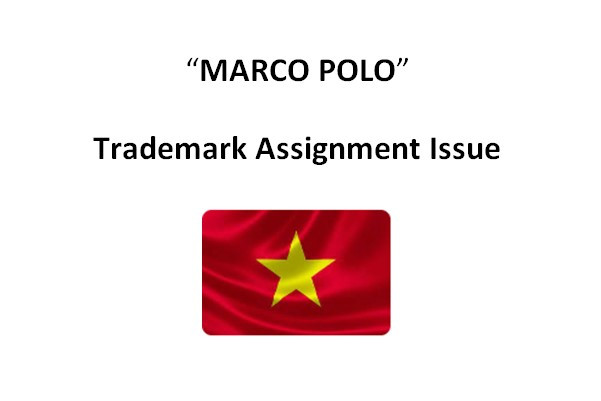 trademark assignment which it deemed to cause public confusion.

However, the Vietnam IPO (VNIPO) issued an office action stating that the assignment of the subject mark would likely cause confusion as to the origin of the designated services, because the assigned mark is identical with the trade name of the Assignor. Also, the VNIPO suggested that in order to overcome this refusal, the client needs to provide the documents proving that their situations match either of the following cases:

In this particular case, our clients found that their situations did not match either of the cases listed by the VNIPO. Therefore they decided to follow our advice and entrusted us to file a response to the office action, supported by the Assignor’s Declaration and other documents to persuade that no confusion would arise as a result of the trademark assignment.

Having reviewed the vigorous arguments in our responses, in December 2021, the VNIPO finally accepted allowed the trademark assignment to be recorded.

Under the current trademark regulations and practice of Vietnam, if the assigned mark incorporates the element which is identical with or similar to the trade name of the assignor, the trademark assignment will be considered to cause confusion to the public, which will not be allowed by the IP Law. The case being discussed is among the first ones to which the VNIPO’s first-ever Regulations on Assignment of IP rights, which came into effect in late December 2020, was applied. With this first-ever Regulations, the VNIPO has officialized and tightened a number of requirements regarding trademark assignments.

[For more information on the regulatory restrictions of trademark assignments in the country, please click HERE to read our relevant article on this matter.]

Unlike some other countries which statoturily leave to the involved parties the onus to ensure the assignment will not result in public deception or confusion (such as Australia, Cambodia, etc.), Vietnamese IP Law have general provisions on the restrictions of assignment of IP rights, and the VNIPO, with its Regulations, has chosen to impose a number of strict requirements for the examination of trademark assignment to be recorded. Accordingly, in Viet Nam, the assignment of a registered mark which has even never been used in commerce can still be considered to result in public confusion just be cause it incorporates the element identical with or similar to the Assignor’s “trade name”.

Also, with the said requirement in its effective Regulations, the VNIPO seems to automatically deem the name of the registered holder of a trademark a “trade name”, which is an improper transformation because the holder’s registered name  is neither necessarily a trade name nor a subject matter of IP right as per the law. In this regard, as far as we know, for the draft new Decree on guiding and detailing the implementation of the newly amended IP Law which is expected to be finalized by the end of this year, the VNIPO is proposing to add some provisions to legislate that a trademark assignment will be considered to result in confusion as to origin of goods/services “if the assigned mark incorporates the element which is identical with or similar to either the trade name or full name of the assignor”.

We will continue to keep you updated on changes of regulations and practice concerning IP transactions in Vietnam in our upcoming articles.